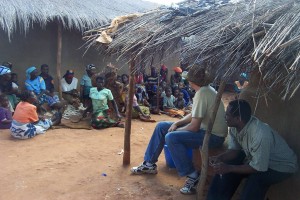 Village in the bush of Africa

I graduated High School in 1957. My life has been most interesting with its trail of twists and turns. I probably should fill you in. Most recently, in my service as a deacon, my wife and I had the privilege of doing some cross-cultural work in the African Bush from December 2007 until January, 2009.

We were with a team that brought the Gospel message to a remote and forgotten people group in Eastern Africa. The group is about one and a half million strong. Their rural area is in the eastern reaches of Malawi and western Mozambique.Malawi and Mozambique are two of the poorest countries in Africa. The average per capita income is about $200 per year. Those 14 months of service intensified my passion for scripture and truth. I am sure that it will continue to be so until my work here for the Lord is done. As Paul Harvey used to say, “And now for the rest of the story…”

That summer in 1957 after leaving High School, I joined the Air Force. In October, I went to Lackland AFB,San Antonio,TX for basic training. In the spring of 1958, I left for an assignment in Europe. I returned in June of 1961 for discharge. I worked for several years and decided it was time for more education. I attended college in Dallas,TX earning an associates degree in May 1970. I continued my education at Baylor finishing my junior year.

With the demands of a growing family, we moved to Houston in 1973. I worked in the petroleum industry in Houston until the spring 1981. Because of a medical condition, we moved to Phoenix, AZ in the fall of 1981. After a couple of positions in local and state government, I retired in 1996.

Retirement was short-lived as my part-time involvement in Real Estate soon became full-time. In 2001 I was hired by a National Real Estate company from Florida as Arizona Broker and Vice President of the Western Region. Stress, overwork and a medical condition forced me from Real Estate in January, 2007 and into my 2nd retirement.

In 2002 I had begun to do some part-time work as a writer and author. My first book, SpiritQuest: Our War with Choices was published in June 2004. I am presently working on my second book which will be published soon. At present, there are at least two more books to be published within the next twelve months. I write mostly non-fiction on Biblical topics.

SpiritQuest 2: Interface with Creation covers some of the creation controversies and the lack of answers to key questions. The work is primarily designed for pastors, church leaders and those in the church who desire to learn more about pivotal creation issues and how our universe began.

My background and interest in these Biblical topics comes from primarily two sources. First, I became a believer in 1979 after a couple of decades as an agnostic. Easter Sunday 1979 was a pivotal event for me. After moving to Phoenix in 1981, our family became involved with North Phoenix Baptist Church. In 1982 I began training as a teaching deacon and was ordained in January of 1983. As a teaching deacon, I became intensely involved in the teaching of Biblical truths.

Second, my degree at DCJC was in philosophy and my studies at Baylor continued that path. Philosophy and seeking truth became my passion and still is today. God has helped me to combine my passion for truth and love of scripture in my writhing. To be God’s passionate servant and scribe are the driving forces in my life today.

As I began, I will now return to the story of how my wife and I became involved in doing some cross-cultural work in the African Bush from December 2007 until January, 2009. What began earlier in June, 2006 as a fledgling prayer ministry was to now lead us to a special organization. It was a large, world-wide outreach ministry that was working to bring the Gospel to Muslims who had never before heard the story of Jesus. We became involved with the Frontiers Organization in May of 2007 as prayer partners. Little did we know that before end of the year, we would be in Malawi, Africa. It is a story of how God can work in the lives of believers in the most unexpected ways!

After those fourteen months, we returned to the U.S.and I resumed my writing. My wife, Marilee, who was a 25 year veteran of teaching, began a career change. She has now completed her training as a licensed LPN. For both of us, these changes so late in life were quite unexpected. Marilee is now beginning her new career in nursing and I am continuing to write and publish books. Yes, there is a story behind why we made these changes.

I write and sell books for several reasons, one of which is that I love to write about my passion, God’s Word. Moreover, I also have a second reason. It is that some the proceeds from the sale of my books go to fund the ministry teams in Mozambique and Malawi. These two teams are there to minister to these Mxxlim people groups and carry out the great commission that Jesus left for his followers.

At my age, it would be difficult for me to return to that area. However, I and those who read this can still help by doing what we can to fund those ministry teams. They do the tough part by ministering to a difficult to reach people group in a hard to reach part ofAfrica. They risk very much on a daily basis. Not only are they at risk from hostile groups within the religious community, but also from malaria and other diseases. They also have to travel great distances (when they can get fuel) to get needed supplies and medical treatment. Any source of additional funds they can get is a great help to them. That is my reason for writing and sending them financial resources when I can.

Therefore, the more books I can sell, the more funds we can send to them. Let me encourage you in a couple of ways. Help us by buying books and also by visiting our website to hear the latest in how others can become involved if God directs them. The book website is www.sqbooks.com and our ministry website is www.sq-ministry.org. Please also add us to your prayer list so this important work in Africa can continue to spread the Good News. For those who might have an interest, search for me on Facebook as Herman McElfresh.

This site uses Akismet to reduce spam. Learn how your comment data is processed.

Manage Cookie Consent
To provide the best experiences, we use technologies like cookies to store and/or access device information. Consenting to these technologies will allow us to process data such as browsing behavior or unique IDs on this site. Not consenting or withdrawing consent, may adversely affect certain features and functions.
Manage options Manage services Manage vendors Read more about these purposes
View preferences
{title} {title} {title}